Monster In My Pocket (NES) 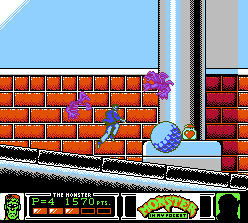 Genre: Action
Perspective: Side view
Visual: 2D scrolling
Gameplay: Platform
Setting: Fantasy
Published by: Konami
Developed by: Team Murata Keikaku
Released: 1992
Platform: Nintendo (NES)
Characters of this platforming - the monsters, just like the real thing, only tiny. Such that they can freely get into your pocket, and there is still room left. Our characters (different only in appearance) and the name Monster Vampire, they are fighting against the treacherous sorcerer and his minions. The main idea - to show the world through the eyes of small creatures - the creators turned out perfectly. That there are, for example, the first levels, monsters when traveling through a huge house, jumping on the pads, tape, climbing on a stool as the mountain at high speed ran down the banisters ... Drawing colorful levels. In general, I received a very good and enjoyable game.

Monsters in my House

On the way to the stairs and inspect the cassette arm wrench. When you go down the stairs, do not avoid the collision with flying sphinxes. It is necessary to jump on the railing, and as it should be dispersed as a result of the sphinxes flee themselves.

Big Trouble in the Kitchen

On this site you will meet the "kitchen monsters." The most important of them is sitting in the refrigerator. Neutralize it easy, you have to constantly jump and hit from behind.

There will have to go through the sewers. To defeat the boss of this level, it is necessary to build up a solid stock of vital energy. Keep in mind vulnerability boss - the head.

To pass the ordinary monsters, jump on the next hanging hook, and it will carry you to secure your path. On inclined beams You will meet with monsters trying to put you to the bandwagon. They do not come, but rather jump. Climbing on the platform, stand in the center, turn left, to the right, striking the flying monsters. At the end of the stage you will find a fight with the boss, hanging on a hook. When he moves from left to right, do high jump, turn around and beat.

On you will attack a few witches. Among them, one is real, that it is necessary to recognize and destroy. At this stage, using as a weapon in the form of a bolt or a key. They can be used to neutralize any monster, except the boss.

At this stage, we have to fight with the bosses of the previous levels, and in the final with the main boss - Warlock.

Complete the fourth stage will be easier, if you listen to this advice:
- To wade through a bunch of harmful types, jump on the next hanging hook, and it will carry you;
- When you're running on inclined beams, do not climb to the monsters who are trying to do sweeps, better jump over them;
- Rising platform, stand in the center, turn left, to the right, giving slap flying monsters.
At the end you fight a beast riding on the hook very pernicious kind. Do not try to get on the hook - it's as dangerous as to fall under the grenade. When the boss will go from left to right, do high jump, turn around and beat.
The fifth stage of the action takes place on the street where you attack a whole bunch of mutants and among them five witches. But only one of them is a real witch witch, so to speak. We need to recognize it and to kill. To facilitate the passage of stages as possible, use a weapon in the form of a bolt or key, which immediately kill any monster, except the boss.
The sixth stage (I hasten to please that he is the last), you have to fight with the bosses of the previous stages one by one and with the main boss - Warlock. Victory game does not end over it, as Warlock again appears on your TV screen while firing at you from the eyes. With him will have to deal again, but this time forever, and thus do away with the evil living in this funny game.
‹
›
Home
View web version