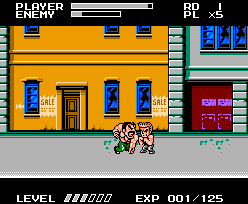 Genre: Action
Perspective: Side view
Visual: 2D scrolling
Gameplay: Beat 'em up / Brawler
Art: Anime / Manga
Published by: Capcom U.S.A.
Developed by: Capcom Co.
Released: 1993
Platform: Nintendo (NES)
The game belongs to the genre beat'em up. The plot is simple: the Mayor of Metro-City kidnapped daughter, your task - to save her. You can choose from three characters: Cody (street fighter, with good use of knives), Guy (descendant of a ninja, has incredible agility), Hegger (irascible wrestler and mayor of Metro City). Everyone has their own set of original methods, which look beautiful and spectacular. There are special moves that cause heavy damage to the enemy. However, their use of the lives of your hero will be taken away. Mighty Final Fight boasts stunning graphics. Drawing characters excellent, thoughtful and qualitative level design. In addition, in the game there are bonus levels, where it is necessary to break the barrels rolling at you, thus earning prizes. When typing the characters experience points, new skills. Interesting ending impregnated with subtle humor, the game will prompt you to go more than once.

A good blow in the jump from A and in the air B. The usual super - turntable in place with a circular kick. Super at the fourth level of development - the plasma ball from the hand: hit the punch and immediately Now, if not releasing the kick button, press ⇨ and immediately ↑, Cody will make the uppercut with which he ends his combo, immediately.

Further, everyone beats with his hand and therefore it is difficult for him to get close to the enemy. The usual super, like Cody. Super fourth level - double kicks. It is necessary to jump back from the opponent facing him and, during the jump holding ↑, mercilessly hammer on the shock button (or pinch the Turbo-A) until the moment of landing. With the turbo joystick, the reception is almost always obtained. Guy will jump up and a sharp, but not very long jerk, will carry all those who stand in the way (including the Bosses), except for the "loaders" (who put the block if they have time).

The most healthy character. Slowly the rest beats. But there is an excellent reception. Grabbing the opponent and slightly pokolotiv, jump with the enemy in his hands and in the air, press the strike button B. The mayor will land the enemy head down. The usual super - turntable with circular impact by hands, while you can move around the screen. Super fourth level - a dash in a straight line with the capture of the enemy.
Bonus points depend on the method of victory over the enemy. For a simple blow give 1 point. For the usual super reception 2 points (do not forget that this method spends your health). For the throw give 4 points. Haggar for a jump in the jump gets just 8 points. For special reception of the fourth level, give 6 points.

Boss is a monkey-like ambal in glasses. Oh, I'm setting up! Our character has fallen down, where he will catch up with the ambala. There is a conversation with questions and answers. After the fight. Best try to attack the enemy in a jump. Do not attempt to attack a reclining, with the bosses this number does not pass.

The boss is something special with two swords, named SODOM. Sodom simply comes to you with the intention of hitting one of the swords, hit him in the jump. And if he quickly runs in your direction, step back and gently grab from the back. After the victory - a bonus (steel barrels). It's best to break them all, then get two lives.

This boss can intercept your jump with an uppercut and gets far. If he became motionless and his face becomes red, it means that a quick attack on you will follow (he can rush diagonally). There is time for an attack, while it turns red, and you can dodge the boss again, after dodging.

In the underground dash you are attacked again by the boss Sodom. When he has less than half health, he will throw his swords and start moving very frantically from the edge of the screen to the other side and banging your head. Gently jump over it and attack from the back. Then the barrel bonus.

That's the final fight. It turns out the one who ran all the criminality. On his hand is a nozzle with a mechanical fist. After a while it turns out that the boss knows how to shoot from this attachment. If you approach him closely, the boss immediately takes to another part of the screen and continues shelling. Hold on to him so close that the enemy does not panic, beat off shots with your punches and wait. After a certain time, the boss freezes and laughs like a real villain.
Here it is, your chance. After the disassembly, the boss is blown up with ammunition.