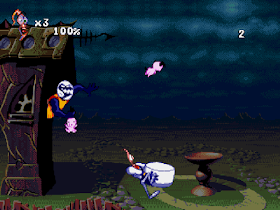 Genre: Action
Perspective: Side view
Visual: 2D scrolling
Gameplay: Platform
Narrative: Comedy
Published by: Playmates Interactive Entertainment
Developed by: Shiny Entertainment
Released: 1995
Platforms: SEGA Genesis / Mega Drive, Super Nintendo (SNES), PlayStation (PSX, PS1), DOS
The next series of "Earthworm Jim" significantly increased its already high rating. The graphics have improved incomparably. The sound is also on the level - especially since the creators decorated the game with classical works, for example, "The Moon Sonata" by Beethoven. And the melody on the cut scene for the first time on Sege (in my opinion) is supplemented by choral singing! It is no coincidence that the list of functions of the secret menu was supplemented by a music box. The authors have new objects, jokes about which can be long and fun - Jim himself in the predecessor game and her other characters (mostly Burenki). And the "volatile" stages are those which have not yet been seen by the world! The complexity of the passage of the stages of the second part has decreased considerably. Basically, thanks to the password mode, which are introduced as you progress through the level by collecting special flags. Find them is not easy, but by collecting all the "letters" and completing the level, you can later, if life ends and continue, skip it and immediately take on the next one. With the turn off of the prefix this result is reset, but after mastering the control, you will pass the game in one sitting. Unlike SNES, where one of the joystick buttons is given under the weapon type switch, the weapon is spent on the Sega in the reverse order to the one in which you collected it. The inconvenience will arise if you are "lucky", and you stumble upon the "bulbulator" - a cute joke programmers especially pierces in the midst of the hordes of some evil creatures. A double click on the jump button brings to life a nice piece of mucus, now living in Jim's backpack. Since the hooks for which Jim could cling to the whip-head, there are no levels on the levels, for advancement one should use areas of the slippery surface. A green friend is excellent with them, but, as before, for obtaining particularly valuable prizes, you need both an eye and dexterity. The second function of Sopley is to slow down the fall. In the first part, Jim used a head for this, which probably tired not less than the fingers of a player who stinted on buying a turbo joystick.
In the game there is not even the slightest hint of a plot, which, however, is described in the instruction. A minor villain from the first part, the crows Psi-Crow, kidnapped the beloved Jim worm to the princess As-her-there and now in a desperate attempt to throw off the pursuer from the plucked tail jumps on the planets towards Lost Vegas, where the law allows marriage without the consent of the bride - married to The princess will become the ruler of the galaxy. The path is not close, the population of most planets to worms is extremely hostile. Of course, they are ruled by the worst enemies of Jim - the Golden Fish Bobby, the screechy Evil, Major Mukus. Ba, familiar all the faces! ..

At the very beginning you can practice in the management of Sewing and get a life hanging right above your head - for this climb up the hill to the right and jump in the direction of life catch three times in a row for the slimy ceiling. In the caves below the surface, except for the prizes, there is one of the flags. After climbing the chair on the stairs in the rain from the old ladies, plan on the parachute through the false left wall. The second flag you will not miss, and the last one at this level - behind the fake wall in the lake under a long sticky ceiling. The most valuable prize of the game is a sandwich that gives 200 percent of the health is hidden behind a wall, as well as the site of the rock, for which you need to cling to get it. Let Soplyu at the end of the jump, before landing, to penetrate the hiding place. Before the battle with Bobby, go back to the beginning of the last corridor - a sound will sound, and on the ledge from above there will be previously unseen prizes. More than once in the game you can do a similar trick.

On this planet, Jim will have to clear the way with a laser. If you find a watch on the road, do not rush to pick it up - take it when the thunder hits, and the counter counts down the last seconds before the new earthquake. The nozzles and holes, from which the ants climb, it is better to fill with sand. Above the third clock with the help of a snot you can take a sandwich. Having risen even higher, you will find life. Then, on the parachute, go to the right of the flag. From regular hours, make your way through the sand to the left. Another sandwich you get, planning on a parachute. And for the extraction of life and the last flag, you have to raise the floor under a long slimy ceiling, clean the island with the laser, jump on it with the help of Snot, and descend onto the ledge by parachute. The boss is better to beat with a whip.

Catch the puppies in the order in which they are thrown by Psi-Crow. Until you make sure that the next animal continued flight, the springboard from under it do not clean. To beat off a "difficult" puppy will help a timely cast. Prikol: activate the map mode, and when the chips fly, press A - Jim falls off the top and, if lucky, will beat the puppy at the top of his trajectory - the unfortunate fly away from the screen! Villi People. All the flags here are clearly visible, on the forks I advise you to first choose the path marked as Hard, and for the second time - Easy. Collected worms will be useful to you on the quiz at the end of the level.
In total, 73 funny questions are laid in the memory (the answer, as a rule, is also required not the most believable, but the most cheerful), but you will not get more than 15 honest ways.

Your task is to push through a balloon with a bomb attached to it to the abode of the ugly Mukus. Along the way, it will be necessary to shoot a lot, and the bomb from the impact of the charge explodes, so it's easier to clear the road first, and then return to the burden with accelerator rockets. Catapults on the ground you can not shoot - knock down a stone lying nearby, and it will crush annoying devices.

At the very beginning, there is a lot of mucus in the rock above the head, along which it is necessary to climb with the help of Snot to jump to life. After that, jump into the hole and through the hole in the wall under the shaky step go to the teleporter. You will be in the upper left corner of the level where there are two flags. To jump over the reverse teleporter (in the wall the passage is again hidden over it) is not so simple, but in case of breakage one can quickly lose a life - all prizes and exploded portals will return to their place. The third flag is hidden under the exit from the level. If the aliens nip you a cow, hit their plate with a whip.

On the right of the second "kharni" go down through the hatch - you will find a sandwich, a flag and a pair of worms. The latter here also serve as tokens on the attraction.
ISO9000. The first flag, whip in a whip, it hangs from above to the right of the paper machine. To extract the second flag from the first barrel, fly on Sople, and then immediately on the parachute to the ledge above the candles. After that, again on Sople, but with a transfer, you can jump to a sandwich, and if you fly a little farther, Jim will grab his head for the invisible rope leading to the island, from which you can get to the cache with life on the parachute. Another life you will find if, going down, slow down on a steep slope - there is an invisible and narrow hatch. The last flag is in the lower right corner of the level, it will be helped by a long jump. Half-naked hangmen whip.

All flags are taken with a whip. After the place of the mark there will be a sausage descent with forks at the bottom, covered with an omelette - between the forks and the last one can be flown by parachute. Stepping to the left, you will find yourself on a secret level, where life lies and a "magical (strong-multi-charge) glove".
Run Jim Run
Your trumps in this frenzied race is the acceleration Jim gets when flying on Sople and stumbling upon a ball with the letter "J", and sharp turns - the opponent usually does not cut them off. The most difficult moment is a wheel that rotates counter-clockwise. You must pass it first. In order not to lose time at the door, beat them in a leap with a whip.

(can be changed in Options)
A - a fire from a red pistol of green color, a turn when catching puppies;
B - kick with a whip, discharge of gas from the head for descent;
With - a jump, a turn of a rocket, a bloating of a head for lifting;
B and C - flip flippers in a suit salamander, a throw for the puppy;
With the jump - the launch of Snot with the intention of catching;
And in the jump - a parachute;
Up + A + B - impenetrable (but still) shield.