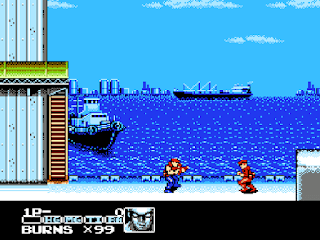 Genre: Action
Perspective: Side view, Top-down
Visual: 2D scrolling
Gameplay: Arcade, Platform, Shooter
Published by: Konami
Developed by: Konami Co.
Released: 1992
Platform: Nintendo (NES)
The game has been realized many innovations compared to previous games of the series:
the choice of the protagonist of the four characters that were different set of weapons, jump height and running speed;
Weapons change occurs by the accumulation of bonuses;
It was homing missiles;
interactive environment: individual devices, boxes and some items can be destroyed;
effects of atmospheric phenomena: the wind blows in the direction of the character running through the wing of the aircraft.

The game begins in the fictional town of Neo City in 1992. It is the center of the operational response to organized crime, called Contra Force, which is headed by a man Burns family. Before operatives tasked to destroy the crime syndicate called D.N.M.E. Burns calls a certain Fox informant and reported that unknown persons threaten the head of intelligence. Burns informant appoint a meeting to learn more details. However, when Burns arrives at the port, where the meeting was scheduled, it appears that Fox was already dead. Burns and his group suddenly attacked by armed bandits. Now the heroes have to clean the city from the terrorists ...

Sturmovik. He is the team leader.
HG - Hand Grenade - Hand grenade: a very useful thing if the enemy is hiding behind the fence.
MG - Machine Gun - gun: functionality similar to M-arms of the Contra, but shoots bursts.

Sniper. R - Rifle - Rifle: the same as the gun only shoots on (pistol shot flying about a third of the screen).
HM - Homing Missile - homing missile: rocket sends the nearest enemy. Of the minuses need to mention the possibility of a missile to shoot down the bad flight and accuracy.

for heavy weapons specialist.
FT - Flame Thrower - Flamethrower: range is very low, about two players of growth, but it has a greater damage (approximately 4-fold) compared to small arms. You can also kill enemies through walls.
B - Bazooka - reactive anti-tank grenade launcher, has a standard damage.

Mine-laying specialist.
TB - Time Bomb - a time bomb: an explosion is given 2-3 seconds. The explosion of small radius, but more damage (approximately 4-fold) compared to small arms.
TM - Termite Mine - thermite mine: the same as the TB, only to explode immediately and range anymore.
It should be noted that the weapon is not the only feature that separates the characters, the second fairly important characteristic is the distance of the jump. Burns is the biggest, in SINS - smaller and almost equal to the length of Smith's jump, but the Iron is very sluggish due to which the overcoming of even small breaks becomes not an easy task for him. In addition, Beans automatically crouches when not moving, and when you press down - in the position of lying.