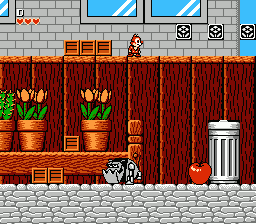 Genre: Action
Perspective: Side view
Visual: 2D scrolling
Gameplay: Arcade, Platform
Published by: Capcom U.S.A.
Developed by: Capcom Co.
Released: 1990
Platform: Nintendo (NES)
Chip, Dale, and their friends are back in business! Of all the games created by Capcom for Disney, this is probably the closest to the source, the animated series. Then we'll fight with the robo-dogs professor Nimnul, run by mimicking chipmunks aliens under gills give blatant Betta fish, will visit the factory cat Fat Cat - all in different series of the cartoon. Manage we Chip or Dale, and playing for two - both at once. Rodents are straightened with the enemies, throwing them in all sorts of materials at hand, which are in abundance in the levels. Friends Rescue from time to time to help: Monterey Jack breaks the wall, Zipper pounding enemies and kidnapped Fat Gadget Hackwrench gives valuable advice. In the mode for two dead chipmunk while flying on a balloon, which makes the game even more fun.

Cactus and voltage in the wires are dangerous.
Robot cleaner, to which at the end of the zone you will lead the Rocky, you can destroy with five hits in the light bulb.

Your task here is to climb to the very top of the tree.

Each of the chameleons takes the form of one of the chipmunks.

Kangaroos can be killed by two hits in them boxes or other items. It's better to jump to the fans.

In the toy store, beware of the evil cleaners and cocks. In dark boxes there are many surprises, they are dangerous! To get into the robot, thrice hit it, slightly bouncing, into the stomach.

Caution! There are caterpillars and beetles in the garden.

Handy Fat Fuck, scammers. You will find in the casino.

On the first floor, dodge the balls, and on the second floor, climb up the moving shelves.

Using the jar, you will take a lot of useful.

Buttons and fans are dangerous!

Axes, found in the cannery Fat Cat, you need to jump over, and then turn off.