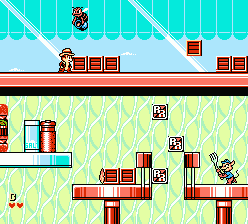 Genre: Action
Perspective: Side view
Visual: 2D scrolling
Published by: Capcom U.S.A.
Developed by: Capcom Co.
Released: 1994
Platform: Nintendo (NES)
One of the main villains opposing rescuers Fat cat has escaped from jail and is planning to steal an object known as the Urn Pharaoh (Urn of the Pharaoh). To rescue workers were unable to thwart his plans, Fat Cat is taking a series of diversionary action, the first of which becomes a time bomb left by his assistants in the cafe. Chip, Dale and the team sent to neutralize the bomb and simultaneously trying to prevent Bellowfiz his criminal career.
The second part of the game about the rescue chipmunks differs a clear storyline, numerous dialogues of characters, a variety of boss levels, which should be eliminated using unique tactics for each, and the ability to find secret places with the competition together with the game.
Bosses are represented as enemies of the series known for rescuers, and specifically designed for playing villains that stand in the way of the main characters in the course of the story. The final boss is a robot cat Fat Cat likeness.

A - jump (the height of the jump depends on the duration of pressing the button) towards the object and B - take the objectIn - throw the subject forwardDown - if without a bear - to sit down, with a box - to hide behind himDown, In - drop the item downwardUp, In - throw the item upLeft + Up, B - throw the object diagonally forward and upDown, A - jump down.

Changes in the second part