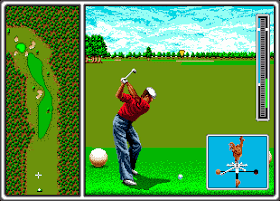 Genre: Sports
Sport: Golf
Published by: SEGA of America
Developed by: SEGA Enterprises Ltd.
Released: 1989
Platform: SEGA Genesis / Mega Drive
This is one of the first games of Sega, and the first golf simulator (Traditional golf simulation) on this console. For its best sale, a small marketing move was used and the name of the game appeared in the name of Arnold Palmer. In the game in the tournament mode, 12 rounds of 18 holes. The main goal of the game is to win the tournament. Whatever game is not boring and it could be without difficulty to pass, after each level a password is given.
The game was released under the following names: Arnold Palmer Tournament Golf and Super Masters Golf.
‹
›
Home
View web version