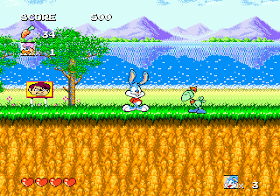 Genre: Action
Perspective: Side view
Visual: 2D scrolling
Gameplay: Arcade, Platform, Puzzle elements
Published by: Konami
Developed by: Konami Co.
Released: 1993
Platform: SEGA Genesis / Mega Drive
Tiny Toons smart kids from the famous producer Steven Spielberg, a big fan of Looney Tunes / Merrie Melodies. Tiny Toons cartoon characters, who are brought up at the University of Acme under the supervision of such celebrities as Bugs Bunny and Daffy Duck.The games turned out to be just wonderful, cartoon graphics, funny animations, funny sounds, so do not think these games should be urgently uploaded until the connection was lost :)Buster's Hidden Treasure (1993, also known as Buster's Treasure Hunt is a surprisingly wonderful analogue of Sonic, where Buster Bunny should collect parts of the map, where it is indicated where the treasures hidden by Montana Max are buried).

Collect carrots - for every 50 pieces give a bonus of being able to call on the aid of the hero-Toon - a friend of Buster Bunny. This trick allows you to quickly get rid of all the enemies on the screen.
‹
›
Home
View web version