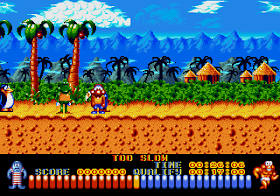 Genre: Sports
Perspective: Side view
Visual: 2D scrolling
Gameplay: Arcade
Sport: Olympiad / Mixed Sports
Published by: Electronic Arts
Developed by: Millennium Interactive Ltd, Vectordean Ltd.
Released: 1993
Platform: SEGA Genesis / Mega Drive
The main character in the game - James Pond - funny frog. Together with its akvabatami it in a peculiar humorous manner demonstrates its agility, speed and desire to win first place in this exciting original event - an analogue of the Olympic Games in the animal world.
The game consists of 8 different types of events, each of which is associated with water: 100 Metres, beach handball, feeding the hungry fish, shells and throwing others. Let you not be fooled by the appearance of the game: in spite of the "cartoon" graphics, which creates an impression of ease of passage, the complexity of the gameplay itself is quite mature. Prepare to be to as quickly as possible, and often to press the button, otherwise you will not be able to come to the finish line first.
Very nice positive thing - the presence of the original classical pieces of music that is played in the background at the start-up screen, and during the competitions. The smooth movement of characters creates a pleasant aesthetic appearance.
It is worth noting that this game was met with public cold enough - the gaming community of admirers console games were not ready to accept a sports game done in a comic style. The disadvantage of the management, which consists in a complex and not understood intuitively combined operating buttons, finally deprived the product co-creation companies Millenium Interactive and Electronic Arts commercial success.
James Ponda came a few more games:
‹
›
Home
View web version