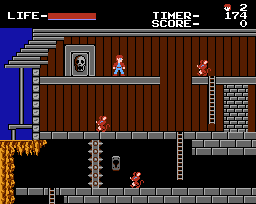 Genre: Action
Perspective: Side view
Visual: 2D scrolling
Gameplay: Arcade, Platform
Published by: Konami Industry Co.
Developed by: Konami Industry Co.
Released: 1986
Platform: Nintendo (NES)
Very addictive platformer released by Konami back in 1986. Young hero rescues friends from captivity, wandering an abandoned restaurant first, and then the caves. He prevented large anthropomorphic mouse and a bandit. Foes have to peel down. Mice can not stand for a long time, but the bandit will not kill you can only stunned for a while. Of the mice fall bomb. With these bombs, and you have to release the hostages by placing explosives under the door. Also in the door, you can find useful prizes and keys to exit from the level. In addition enemies at locations lacking different obstacles, so be careful. The whole process is so entertaining that time the game fly by for you.