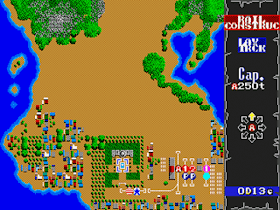 Genre: Simulation, Strategy / Tactics
Perspective: Top-down
Gameplay: Managerial / Business Simulation
Pacing: Real-Time
Vehicular: Train
Published by: SEGA Enterprises Ltd.
Developed by: Artdink Corporation
Released: 1992
Platform: SEGA Genesis / Mega Drive
A-Train series, known in Japan as A Ressha de Ikou and Take the A-Train - the first, but not the only one, is a simulator of the railway system. The beginning was laid by the Japanese company Artdink in the distant 1985. In the United States, locomotives appeared since the isometric A-Train III in 1992, however, under the name A-Train.Now we are steering the city railroad branch, carrying passengers and cargo. At your disposal is the city, the company, the railway tracks and the locomotives - there is no competition, but it does not get any easier. The game is not of the highest quality. Graphics are small, in general, nothing interesting - an amateur. In part, this is because the version for SEGA (possibly) was made on the 1989 version of the game.
‹
›
Home
View web version