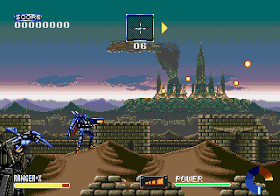 Genre: Action
Perspective: Side view
Visual: 2D scrolling
Gameplay: Fighting, Shooter
Setting: Sci-Fi / Futuristic
Vehicular: Flight / Aviation, Mecha / Giant Robot
Published by: SEGA of America
Developed by: NEX Entertainment Co.
Released: 1993
Platform: SEGA Genesis / Mega Drive
The player controls a so-called Ranger-X, a man located inside the combat exoskeleton, which protects your home planet from the invasion of foreign invaders. Hero equipped jetpack, with its power can fly, but only for short distances. Volatility backpack depends on its temperature, as soon as it is heated, the character to land on the ground and wait until the engine cools down. In addition to the standard rifle player available and some additional types of weapons, such as a flamethrower, and a device with the returning shells. The use of additional energy weapon limited scale, decreasing after each shot, and recovering by collecting special items to increase the energy level. On some levels, the hero is given the auxiliary mechanism called Indra - a futuristic motorcycle resembling "Robocop, sitting on a Harley". Indra is able to move and fire, regardless of the Ranger X, but if desired, they can be connected into one more powerful fighting unit.
The entire game is divided into several levels, before each of which there is a small briefing, which explained in detail the objectives and tasks of the upcoming mission. To pass the level of the hero, usually through hordes of enemies should break at a particular place, to destroy targets, and defeat the boss.

Radar. At any level in Ranger X, you need to destroy several bases to complete the task. The number of bases and their location is indicated on the radar in the middle from the top.
Vital energy. Shows the stock of your life energy, and if the robot sits on a motorcycle, then at that time the vital energy of the motorcycle is indicated and taken away. If the robot is outside the motorcycle, then the motorcycle is invulnerable. If the vital energy of a motorcycle or robot ends - the character dies.
Light energy. The robot has the ability to use a superweapon. Use a superweapon robot can only if the level of light energy is sufficient for use. Light energy is also used to replenish Life Energy at special recovery stations or when collecting special batteries replenishing the Life Energy through Light. Light energy is replenished from light sources.
Indicator of the superweapon. Shows which superweapon you chose or use. If the light is blinking, then the light energy is not enough to use the superweapon.
The indicator of flight energy. Indicates the amount of energy available for the flight robot. If the indicator reaches the red mark, the engine turns off. The flight energy is replenished when the robot is standing or moving on the ground or other solid surface.
Points. Here you count the points you scored.

Specified for the 6 gamepad.
Control in the game depends on where the robot is located.

Robot is outside the bike

Robot is on a bike

Robot is inside the bike

Robot is in an airship

Use Y and B to change the superweapon.

Super weapons are listed in the order of its placement in a motorcycle / airship. Russian names are invented arbitrarily, official English names are given in parentheses.

Power: Low.
Range: high.
Energy consumption: low.
Features: The main weapon in the game. Some levels without a laser are practically not passable. If you hold down the button - the laser is self-guided. Effective against aerial targets, as quickly induced on them. Is able to destroy bullets of enemies (not all).

Power: High.
Range: high.
Energy consumption: medium or high.
Features: Self-guided weapons. Arbitrarily chooses a target and flies to it. It is at the target, destroying it, after it flies to a different goal, etc. If all targets are destroyed, it returns to the robot. Energy is spent while destroying the target. Effective weapons against non-moving or quietly moving targets. The walls for the eagle are not a barrier.

Power: low to high.
Range: medium.
Power consumption: high.
Features: Placer fire. A very powerful weapon, if all the placers get into the target (and at close range), but very weak, if only a part of the placer has hit the target. Rather pointless and weak weapons, but burns bullets almost all enemies (even bosses). If you do not like to hurry and cherish your life, then this weapon is just for you.

Power: ultra-high.
Range: ultra high.
Energy consumption: ultra-high (100%).
Features: Secret weapon. It makes sense to use only against the bosses. A huge flash destroys everything around, plus another half a screen ahead. It punches the walls, destroys the bullets of opponents.

Power: High.
Range: ultra-low.
Power consumption: high.
Features: Secret weapon. English speaking passages are silent about it. But it was found by me even on the console itself. It is a protective field, which gives the robot complete invulnerability. If the field is sent to the enemy, it will be destroyed.
There is a rumor that there is one more level and one more weapon. I read this information on one Japanese site. But how to open them, I did not understand, everything is in Japanese. It is hard to believe that they can be opened without the help of GG codes, since a new weapon (some kind of glowing lights, very weak) does not have an icon, and I did not see the secret level at all.

Pause game play and press Up, Down, Up, Down, Up, Down, C, B, A, Right, Left. The music will resume to confirm correct code entry. Enter one of the following controller actions to enable the corresponding effect.
Level skip: Press B.
Slow motion: Press A. Press Start to return to normal speed.
‹
›
Home
View web version