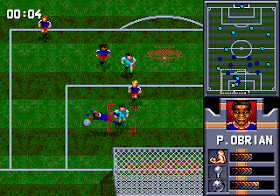 Genre: Sports
Perspective: Top-down
Visual: 2D scrolling
Sport: Football (European) / Soccer
Published by: Asciiware
Developed by: BGS Development, ZAT Productions
Released: 1993
Platform: SEGA Genesis / Mega Drive
I do not think that you can tell a lot about the football game, a football simulator, this game is difficult to name, so this is rather an arcade version of football. Management in the game is simple, and it's not difficult to play the game. To score a goal is easy enough, it's even easier to miss it. In football there are fictional teams Asciiware World Sports, among them there is also a team from Russia. A good plus is that you can make your own team, and call it whatever you like.
‹
›
Home
View web version