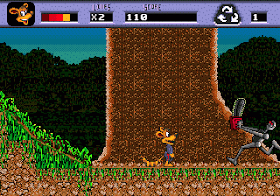 Genre: Action
Perspective: Side view
Visual: 2D scrolling
Gameplay: Platform
Setting: Sci-Fi / Futuristic
Published by: Tengen Inc.
Developed by: Tengen Inc.
Released: 1993
Platform: SEGA Genesis / Mega Drive
This mediocre platformer, something similar to the game Sonic the Hedgehog. Here you can also spin and kill enemies. Only in the place of the rings, our character fighter for the environment collects garbage, various empty cans, etc. The main purpose of the Opposum is to stop pollution of the environment. By the way, I forgot to say that the plot, and the whole game is tied to the environmental problem: cutting loess, air and water pollution (environment), dumps, etc. Also at the end of each level you will be asked various questions related to the ecology of the planet. Answering which correctly you will receive a bonus. The graphics in the game are good, as is the soundtrack.

You begin your search for villains with the already order of the fouled, native, rain-fed tropical rainforests. It is already quite habitable different imaginative robots, sawing everything that gets under your arm (and you, including). To end this disgrace and encroachment on the life of a defenseless little animal, boldly jump to all enemies on your head. Try to do it more carefully when dealing with aircraft or machines to destroy the environment, but look, do not confuse the enemy with a trap or a mountain of thorns, otherwise it will be very painful. In order to jump higher, use drums and catapults, placed throughout the forest in a great variety. Using these devices, be careful, otherwise your Opposum can land directly on the milling cutter of one of the sawmills built to transfer wood to sawdust. But it is best to find some means of transportation. Something like a rhinoceros or a giant bee. I am sure that they will agree with great pleasure to help you in the matter of general cleaning on the planet. It's a pity that you can not ride a long bee. You are hard for her, it's not Carlson.

As it turned out, all the forests of the planet were captured by the evil "Fire" (a nickname he received because of his costume). In a suit, he must be hot, because he has a powerful flamethrower with which Fire can brown a meatball or somebody else, so be careful, otherwise you will feel very warm and even a little hot. In the battle with the Fire, try to jump all the time, not only from the fiery jet of the flamethrower, but also to his head. By this method, you will permanently beat off any attack on you from him and will be able to move on.

Imagine, Opossum did not even know that he lived on the island, and to get to Dr. Mashin he now needs to cross the ocean. It's good that one of his beaver acquaintances had an extra scuba. Opossum put it on and plunged into the depths of a littered ocean. The ocean turned out to be not only heavily polluted, but also densely populated by various strange creatures, like an octopus in a spacesuit, which can not live in dirty water, and it has not yet accumulated a water filter. In the murky waters of the ocean, robots (apparently, from stainless steel) and electric acne with sharks frolicked, the production of which Dr. Mashino put on a broad foot. But most of all Opossum suffered from pristavuchih captains of submarines and bathyscaphes, who, seeing the funny little creature, and strove to throw a homing torpedo into it. Be a sea of ​​their down. In order not to run into trouble, try to move around the caves, besides, they have more prizes. On occasion, you can also ride on a ramp, but with it more careful, and then run away. In one way or another, you will still reach the next associate of Dr. Machino. His name is Neptune, again because of the costume - an ancient structure for immersing to great depths. Despite the ridiculous appearance, Neptune is able to move fairly quickly, though only on the seabed (a trifle forgot to put out of pockets). However, this disadvantage is compensated by the fact that Neptune can shoot with sharp harpoons (only horizontally). To Opossuma not suffered the terrible fate of being pierced, keep higher, not allowing Neptune to be on par with you, and from time to time make raids on his defenseless head. When Neptune's helmet bursts under your onslaught, and he himself "lets the bubbles", you and Opossum can move on, leaving behind the mountains of crippled enemies.

Leaving the water, Possum found that he found himself in the vicinity of the pole (that's how far an ordinary underwater walk can take). Well, we'll have to clean Antarctica, especially since even here Dr. Mashino's friends poison the lives of penguins and everyone else who could survive in such cold frost. Mashin built up all kinds of oil pipelines and reinforced concrete structures, and, as a guard, launched a whole bunch of robot dogs and several guards on snowmobiles shooting self-guided rockets. In addition, be more careful when you move around the cave. Icicle bashka will fall - absolutely dead you will be. In order to jump further away, use old tires forgotten by someone in the ice, but jumping, see where you land. There is a risk that Opossum will get into the icy water, and he is not a walrus at all, and he will not get health from it. At the first opportunity, jump to the seagull. With its help you can move faster, but this is not always a way out of a difficult situation. After much suffering, frost-bitten everything that is possible, Opossum under your leadership will get to one of the many ice caves in which the next minion of Dr. Mashino arranged himself a den. He is like an ardent fan of "Mutant League Hockey" dressed in a hockey player's suit and sharpened his stick in order to chop anybody who dares to come to pieces. It is best to stand on the highest ice island, and when the "hockey player" rolls under you, jump on his head. And so, until he has a headache, after which you can go to visit the very Dr. Mashino.

And here is Opossum in the city of Doctor Machino. It's unpleasant, of course, to walk around the heaps of scrap metal, but still have to, because the fate of our entire planet depends on this. In his city, Machino piled huge mountains of garbage and built all kinds of tunnels and metal structures, in which it is so easy to get lost. But not everything is lost, you all just want to be higher than him, since he, having an air transport with nehily artillery, will easily turn your Opossum into mincemeat by an attack from above.

So, Opossum found himself in the lair of Dr. Machino himself. It is difficult to name the log, since Machino has not yet completed it, and it still looks like a "frozen" construction. Everywhere beams, sticks and other building materials, found, apparently, in a garbage dump. I will allow myself to make a small digression. It seems that this level was conceived in such a way that the player must face all the previous bosses, but somehow I managed to slip into an audience with Dr. Mashino, again meeting only the very first. Look, maybe you'll find some crack, squeezing into that immediately get to the doctor. So, at the sight of Dr. Mashin Opossum nearly became wet, it's good that he did not forget to put on a reusable diaper. Machino, for the sake of this case, dressed in his best dress robocopy. Opposum he met with outstretched fists and missile installations. The missiles were extremely homing. We flew to Opposum, like flies to honey, it's good that one by one, but not all at once, otherwise the poor animal would not be able to outsmart this jamb. In the end, thanks to the efforts of Opossum, the doctor got a headache and decided to throw off his suit, so that he could be sent to the pharmacy for a panadol. But there it was, Opossum with great pleasure gave Machino considerable acceleration through the interaction of the paw with the back of the enemy. The reward for the deed feared is the addition of the face of Opposum to one of the most famous memorials of the United States. Here, for some reason, he did not defend the independence of the gulls living on these rocks. That's just with such honors and begins the moral decomposition of any creature on our planet!

To bring up the secret menu, press C + B + C on the title screen, then press and hold left + B and press C. To enter the menu, press A. Here you can make some useful settings such as, for example , An endless number of lives or to make sure that enemy attacks do not cause any harm to your hero's health.
‹
›
Home
View web version