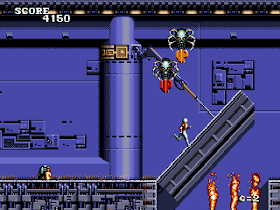 Genre: Action
Perspective: Side view
Gameplay: Arcade, Platform
Setting: Sci-Fi / Futuristic
Published by: Data East USA
Developed by: Data East Corporation
Released: 1992
Platform: SEGA Genesis / Mega Drive
So, the plot. Chelnov was a young scientist. He lived and worked with his father and sister; they led a happy, peaceful life. But one evening, when Chelny returned home, he heard a violent explosion. With a pounding heart, Chelnov ran to the house, where he found his father lying on the floor. "Chelny, my son, I'm dying," his father whispered. And before his death told the cause of the tragedy.
"This explosion ... This is the work of Deathtarians! These creatures lived on Earth long before the appearance of man, and now they came back to subdue us! I knew about this many years ago, so they started with me. there is something ... "Father took out a metal briefcase and whispered:" In this case there is a suit that makes of a normal person - super man. "Chelnov, you must take this suit ... Only this way you can destroy Deathtarians. save the world and his sister, who were abducted by these scoundrels, "and Chelnova's father died. The young scientist opened the case. In it, he found the very suit his father had been talking about. Dressing him, Chelnov felt in himself an inhuman force and need, change his name. So he became the Atomic Runner. But during the first attack, the Atomic Runner was captured by the villains. They dragged him to their base with the obvious intention of finishing off. But they underestimated the superpower of the Atomic Runner. He broke the sphere into which he was put, and now no Deathtarians will escape from his righteous anger. As you understand, only you can help the Atomic Runner to achieve the set goal. We insert the cartridge, turn on the prefix and immediately climb into OPTIONS. So, what can we do here? Quite a bit of. Set the difficulty level (normal, easy or difficult), set the number of lives (3 or 5), the number of continue (3,5,10 or 15), and also enable or disable Rapid Shoot and Rapid Jump - Turbo shoots and turbo jumps (I recommend turning on and off first, and second). You can also change the control (default is A-jump, B-shot, C + left or right-turn left or right) and listen SOUND TEST (melody 06 - well, just class !!!).
Click Start. On the intro we will be explained what is required from the Atomic Runner (you already know this), and the game begins. Before I start talking about the levels, I'll explain the value of the "turn" button in Atomic Runner. The fact is that the Atomic Runner, while saving the world, never stops (except for battles with the main bosses of the levels). Therefore, if you notice a danger from behind, press the left + turn. The atomic runner will run backwards and shoot to the left.
To return to the original state, press right + spread.

The standard weapon of the Atomic Runner is a laser. But you can get other types of weapons for him, namely: shurikens (very handy and powerful enough), boomerangs (come back anyway), homing missiles (the name speaks for itself), triple mace (for close combat) and fire rings (do not take it).

Letter "J" - improvement of jumps, coin - glasses. Red "Up" - strengthens the weapon, blue "Up" - increases the frequency of shots, yellow "Up" - lengthens the weapon (for the mace and boomerangs). Weapons and prizes can be knocked out of enemies (specifically spiders) and from fixtures. More: most enemies can be killed by jumping on them a la Sonic.