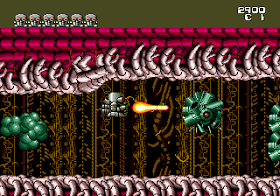 Genre: Action
Perspective: Side view
Visual: 2D scrolling
Gameplay: Arcade, Shooter
Setting: Sci-Fi / Futuristic
Published by: Treco
Developed by: UPL Co.
Released: 1990
Platform: SEGA Genesis / Mega Drive
In the 21st century, as a result of cosmic radiation, the inhabitants of the planet Terra-12 mutate, and the remnants of life enslave aliens. They make a colony out of the planet. You in the role of Robo-Kid should fix everything, destroy the invaders, help the needy and, of course, free the planet. Throughout the game, you need to collect bonuses to improve weapons. Also in some places there will be a shop where you can wake up to buy weapons, something like a shop from the game "Disney's Aladdin". Just impress bosses, they will be just huge and sometimes will occupy more than one screen. Remember the fate of the planet Terra-12 is now in your hands.
‹
›
Home
View web version