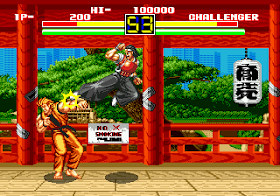 Genre: Action
Perspective: Side view
Visual: 2D scrolling
Gameplay: Fighting, Martial Arts
Published by: SEGA of America
Developed by: SNK Corporation
Released: 1994
Platforms: SEGA Genesis / Mega Drive, Neo-Geo
Selecting characters for Story game does not grandiose - exactly 2 hero. In the same mode, two players can choose from 10 characters. fights settings are present - 4 levels of difficulty, a time limit of 15 seconds to infinity (that is, until one of the fighters will not collapse), the number of rounds 1-5. According to the chart game looks average, but in general for the usual fighting game with dignity.
Sister Rio was kidnapped by the boss of the criminal world - Mr. Big and kept locked up in the city. Rio has secured the support of his eternal rival and excellent fighter Robert and they together make their way through the best fighters of Mr. Big to save his sister. This is a popular video game, inspired by a short anime film.
The game looks like a Double Dragon, but it's more likely even on Street Fighter.
Ryouko no Ken (Japanese original, some names changed).
Sequel, Art of Fighting 2, never came out for Genesis.
‹
›
Home
View web version