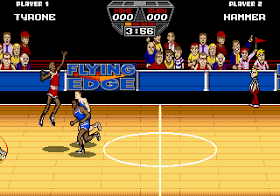 Genre: Sports
Perspective: Side view
Visual: 2D scrolling
Sport: Basketball
Published by: Flying Edge
Developed by: Midway
Released: 1992
Platform: SEGA Genesis / Mega Drive
Another attempt to create on Sega Genesis unpretentious combat simulator of basketball - unsuccessful, in my opinion. From the initial menu, you can go to the sound test screen, select the number of players and change the teams that will fight on the field. Management is blithely explained on the screens of the demonstration. Before the start of the match it is suggested to choose a player - one of the eight offered, special abilities are negotiated. Given the tactics outlined below, I recommend a nigger in glasses - a specialist for throwing a ball into the basket. Automatically, a computer-controlled partner will be appointed - the match is held according to street rules, and two players in the team is enough. Unfortunately, it's impossible to play together against a computer.
The game is divided into quarters, three minutes each. A pleasant cartoon schedule for realism does not pretend, but it abounds with additions such as animated judges, coach and leader of the support group, performances of this same group in the second intermission and the TV commentator. In addition to the process itself, there are a few jokes - how surprised I was when my defender tried to get a rival with a ball in his attempt to get a rival caught by that coward. As a result, both puzzled contemplated the landscape for a second, after which the striker pulled on his panties and ran on to use my inhibition and throw another ball. Now about the sad. It is almost impossible to play in defense. It is worth giving the enemy a second handicap as he runs away to your half and will probably be there for another five seconds to play in passes before an empty ring, as long as you're trying to catch up with him.
Your partner at this stumbling spinning around, as a result, the hands themselves are drawn to the buttons of impact and throw, and the player you control is still in the invisible half of the field, and the interception of the ball is very rare. If you take a defensive position beforehand, there will most likely not be any time for aiming. More often it turns out to sit on the enemy's opponent's tail and knock him down with a throw, for this you must firstly pass it forward. So cowards and cling ... So, the maximum of diligence must be given to the attack. After another hit, the ball is passed to the leader of the affected party. Immediately give a pass to his partner, he will run to the ring. Here I prefer to command a throw from the three-point zone - and you will not be able to block, and with a fairly high probability you will get 1.5 times more points than your opponent just had. If the choice of the partner was unsuccessful, and he smears two of three, it is better to immediately restart the game. In principle, missed, you can again take possession of the ball, but this does not always work out. That's all, perhaps. Whether the game though the mode of tournament fighting with a normal final splash screen and password system, there would be fans. But when, regardless of the victory or loss of the player, you are shown a modest procedure of awarding and a detailed screen of status (percentage of successful throws, number of balls taken, etc.) for the heroes participating in the game, it becomes clear that initially the game was conceived as a razvlekalovochka for two players . Here, of course, everything depends on the choice of the opponent, but in any case, the opportunities are not enough.