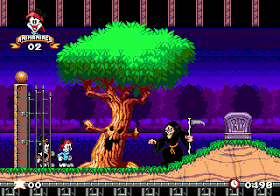 Genre: Action
Perspective: Side view
Visual: 2D scrolling
Gameplay: Puzzle elements
Published by: Konami (America)
Developed by: Konami Co.
Released: 1994
Platform: SEGA Genesis / Mega Drive
Wakko, Yakko and Dot sister escaped from the water tower, in which they were imprisoned in 1930. Now they are spreading fear and chaos everywhere, where there are collected items related to the movie, to open the memorial shop. At each stage, you will be required strategic thinking and management skills of all three maniacs, because you will never overcome any stage with only one character. Beautiful cartoon graphics is well suited to the plot of the game, the atmosphere is drawn clearly and colorfully, can be discerned even facial expressions. Movement of fluid and organic. In general, this side-scroller rather adventyura with elements of action, a bit of enemies, and battles too. But clearly felt the strategic orientation, and have thought hard to break into the next level.