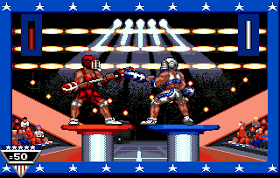 Genre: Action, Simulation
Perspective: Side view, Top-down
Gameplay: Fighting, Game Show / Trivia / Quiz, Platform
Published by: GameTek
Developed by: Imagitec Design Inc.
Released: 1992
Platform: SEGA Genesis / Mega Drive
Many already do not remember this TV show, which was so popular in the US. But now not about the show, but about the popular game American Gladiators made by Incredible Technologies in the likeness of this show in 1991. In the game you have to play a kind of mini-games, I would say with a rather peculiar management. Only 6 competitions, your main goal is to score as many points as possible. In the game there is a mode for several players, which gives the game more excitement, and interest. I think the big players' companies that are going to their retro consoles will appreciate this game.
‹
›
Home
View web version