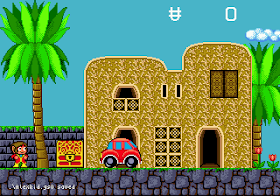 Genre: Action
Perspective: Side view
Visual: 2D scrolling
Gameplay: Platform
Published by: SEGA of America
Developed by: SEGA Enterprises Ltd.
Released: 1989
Platform: SEGA Genesis / Mega Drive
A simple but nice platformer. Alex Kidd - brother of King Igulim, the ruler of the planet Aries. Alex is looking for her missing father in the world Paperok. You have to show all their talents. The player goes from left to right, collecting prizes and fighting with enemies. Alex can go into the house, play rock-paper-scissors, winning various prizes.

Avoid the bosses. To continue without the game "rock-paper-scissors," go to any boss and, as soon as the dialogue, click on start, to get to the selection screen, then press start again.
Defeat the Gorilla. You will destroy Gorilla, if you use the following symbols: Paper, Paper, Scissors, Stone, Rock, Scissors, Paper, Scissors.