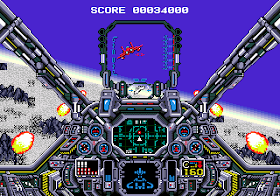 Genre: Action
Perspective: 1st-person
Gameplay: Shooter
Vehicular: Flight / Aviation
Published by: Seismic Software Inc.
Developed by: Copya System Ltd.
Released: 1990
Platform: SEGA Genesis / Mega Drive
Flight simulator with a view from the cockpit fighter. Selection of small missions, all basically boils down to the elimination of enemy air forces. The fighter is armed with rockets and machine gun (well, not pickles :)) Graphically game made at C grade (somewhat similar to the TopGun NES), but the game action is quite tolerable, and the corresponding music.

Selection level. At the mission selection screen, move the crosshair to place the card, which is not an area. Hold start and type A, B, C, B, A, A, B, C, B, A, B. Release the start. If you hear audio confirmation - it means everything is done correctly. Now move the crosshair on the area you want to attack and hold A to fight against the Fighter Ace, B - against Super Carrier or C - against Last Fighter. Do not release the button until you reach the specified area.
Immunity. Pinch the start, until you select the level; hold START + C, to get to the Last Fighter.
‹
›
Home
View web version