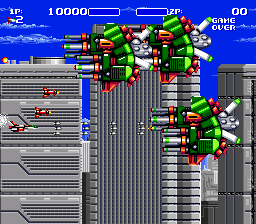 Genre: Action
Perspective: Side view
Visual: 2D scrolling
Gameplay: Shooter
Setting: Sci-Fi / Futuristic
Published by: Kaneko USA
Developed by: Kaneko Co.
Released: 1991
Platform: SEGA Genesis / Mega Drive
In 2021, some unknown forces called Mega Load Masters gathered in the Earth's orbit and destroyed our entire army! But we have an Aero Blaster, even two, so the whole responsibility for the fate of humanity is shifted to the shoulders of their pilots: Mike and Holly. Send the aliens back to their homes, there is nothing to attack them here on Earth.
Fly, shoot, kill, destroy - this game is in this style. But do not turn away, before us is one of the best horizontal shooters in the history of video games! It's especially interesting to play Air Buster together on the console, because not every pre-shooter is designed for two, unlike Thunder Force, Gradius, and R-Type.
In the process, you can collect a bunch of upgrades to the aircraft, so that it was funnier. There are 6 levels in total.
Air Buster: Trouble Specialty Raid Unit, aka Aero Blasters: Trouble Specialty Raid Unit is a horizontal shooter, initially released in the format of a arcade machine in 1990. Complexity, I will say at once, is unusually high, and with any hit, all the accumulated improvements are lost. In this regard, pleased with the Segovia version of the game - the management is very obedient, so it's a pleasure to play.