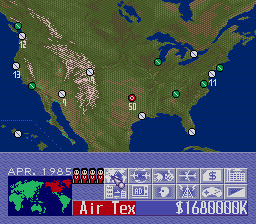 Genre: Simulation, Strategy / Tactics
Perspective: 3rd-person, Top-down
Gameplay: Managerial / Business Simulation
Vehicular: Flight / Aviation
Published by: KOEI Corporation
Developed by: KOEI Co.
Released: 1994
Platform: SEGA Genesis / Mega Drive
This is an economic simulator, is the continuation of the series Koei Executive (Aerobiz / Air Management - Oozora ni Kakeru). In this part, many changes have been made, which improve the gameplay. For example, now, in addition to buying airlines and air routes, you can invest in an amusement park or some resort. Just as significant changes can be considered the input of various events that have influenced the world. For example, various crises, etc. Still there were introduced hypothetical events, the most interesting is that many of these events occurred. Well, many of them seem simply absurd, such as: Ukraine's joining the European Union in 1998, Belarus joining the European Union in 1999 and, of course, Russia's accession to the European Union in 2005. It is strange, why there was no event the disintegration of the European Union.
In this part, you are still in the role of director of a small airline. And among the competitors you have to become the best and crush them.
The game is known under the following names: Aerobiz Supersonic, Air Management II - Kouku Ou wo Mezase, Aerobiz 2, Aerobiz II.
‹
›
Home
View web version