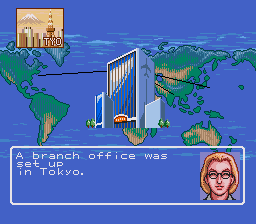 Genre: Simulation
Perspective: 3rd-person, Top-down
Gameplay: Managerial / Business Simulation
Vehicular: Flight / Aviation
Published by: KOEI Corporation
Developed by: KOEI Co.
Released: 1992
Platform: SEGA Genesis / Mega Drive
In this game, you have the opportunity to lift your airline to the skies, not weakly, huh? This and much more makes Air Management original and inimitable.So if you like this kind of games, do not waste time - download, but I'll briefly talk about the gameplay.In Aerobiz, we do not have to make our way to the airline's management. By the wave of a magic wand, the post of leader has already been granted. To deploy your business is given 2 periods of time: 1963-1995 and 1983-2015. In the second case, more planes are available, which means that it is more difficult and more interesting to play. We are rivaled by three more, and, for them can play real people or a computer. In order to get acquainted, I would advise you to instruct all 4 players to the computer and see what it does.

The city for the headquarters should choose the center, preferably in a prosperous country - it's easier to establish connections and more money. Each step of the game - 3 months, then the statistics. At the end of the fiscal year statistics are shown for the year. You can lose if our airline has a year of losses, or if the selected period of time is over. Carefully follow the ads. The Olympic Games promise good profits, but the wars or catastrophe on the contrary. So, we purchase planes (20 types), open new lines, watch everything that happens and make the right moves.

Super NES and Sega Genesis: The games in general are very similar, but SNES, where possible, uses Mode-7 for animation.Sharp X68000 (20.11.1992) - a full-fledged modern computer game, all in high resolution, although, of course, colors are not enough.In 1994, the game Aerobiz Supersonic was released, it also belongs to the KOEI Executive series. The basic idea of the original Aerobiz was retained. It added new cities, aircraft (including piston) and various options, but the gameplay has changed little. That's what changed, so this menu and the graphics component in the direction of improved animation. And the choice is now 4 time periods.In 1996, the game Aerobiz'96 for the platforms Sega Saturn and PlayStation. Outside of Japan, it was not produced.
‹
›
Home
View web version