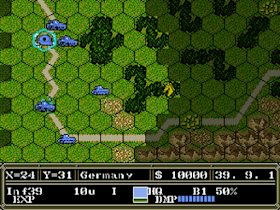 Genre: Strategy / Tactics
Perspective: Top-down
Pacing: Turn-based
Setting: Historical Events, World War II
Published by: SEGA Enterprises Ltd.
Developed by: SEGA Enterprises Ltd.
Released: 1991
Platform: SEGA Genesis / Mega Drive
Daisenryaku is a long-running Japanese strategy game series from SystemSoft and SystemSoft Alpha Corporation.How do you like to participate in a real war, having the most modern weapons and equipment of the middle of the last century - tanks, artillery, infantry, cavalry and aviation. Yes, not just participate, but really change the course of events?This is a real historical war game, where you, in the role of Adolf Hitler, capture Europe as it happened at the beginning of World War II, or, as part of the Allied forces, liberate Europe from the invader! Combat units can be improved, and for a better understanding of the battle, apart from the main campaign, there are single missions. What is most striking - having a modem you can play against each other, for this are provided multi-polling missions!The English release of this game saw the light under the name Iron Storm on Sega Saturn. In another way this game was called Advanced Military Commander. Also see the series of games - Daisenryaku
‹
›
Home
View web version