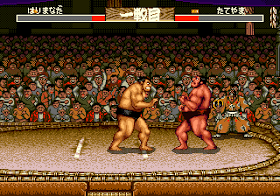 Genre: Action, Sports
Perspective: Side view
Gameplay: Arcade, Fighting
Art: Anime / Manga
Sport: Wrestling
Published by: SEGA Enterprises Ltd.
Developed by: Megasoft
Released: 1993
Platform: SEGA Genesis / Mega Drive
Have you ever heard anything ever about Sumo? So here it is in front of you two fat men trying to throw each other out of a very narrow circle, and that's the whole point. And from this struggle we tried to make a fighting game by the way they got it. Fighting came out very even nothing. There is enough blows, not exactly shock and aftershocks, have cast capabilities. Oh, and the complexity of the enemy here does not depend on his ability to swing your legs and it looks terrible, but from its weight - the stronger the opponent, the more it weighs.
‹
›
Home
View web version