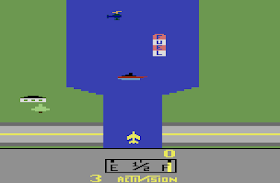 Genre: Action
Perspective: Top-down
Visual: 2D scrolling
Gameplay: Arcade, Shooter
Vehicular: Flight / Aviation
Published by: Activision
Developed by: Activision
Released: 1982
Platform: Atari 2600
The player controls an airplane flying over the river bed, and gets points for shooting down the ships, helicopters, and blimps. The plane can be moved from side to side; the movement of the plane upward on the screen increases the speed of the game down - decreases. Flying over the platforms with FUEL inscription, the player replenishes the supply of fuel. Game levels are designated bridge thrown across the river bed.
Location of land and water in play was not specified in advance - it would require too much memory. Algorithm was used instead linear feedback shift register with a fixed initial value.
‹
›
Home
View web version