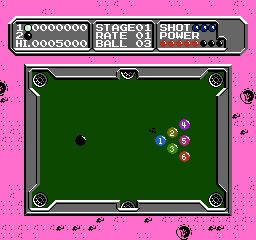 Genre: Simulation
Perspective: Top-down
Gameplay: Board Game
Sport: Pool / Snooker
Published by: FCI
Developed by: Compile
Released: 1987
Platform: Nintendo (NES)
Game «Lunar Pool» is an attempt to create a modification of billiards. The rules comply with the rules of the American pool: beat is only one ball in any case can not be driven into his pocket. Shot Power is regulated by the indicator line on the top right corner of the screen, the direction - cross run.
The main difference from the standard of billiards - a variety of tables, which may be the most bizarre forms with a lot of corners and cubbyhole, and somewhat altered, "moon" the laws of gravity (hence the name, with a hint of a pun).
You can play alone, together, or against the computer.

The game has 60 levels consisting of different configurations of tables and balls; after going through all the levels of the game begins again. The player's task is to score all the colored balls into the pockets at the level of using black ball. Numbering of balls affects only received for his glasses on the order of plugging has no effect. When the ball is pocketed, for it is given 10 points, multiplied by the number of the ball and so on. N. "Rating» (Rate), which is incremented by 1 for each ball, in the case of an unsuccessful attempt scored consecutive reset to the value 1. Once all the balls on the table are clogged, the player receives extra points for the last ball, and more "life". If all the balls on the table have been scored in a row, given an extra bonus points and additional "life." Eight red LEDs on top show the force of impact, and three blue LEDs indicate remaining to withdrawal of "life" in the case of failed attempts to shock; go out as soon as all three indicators, the player loses a "life". Also, the player loses a "life" if the black ball gets in the pocket; In this case, the position of the balls on the table is restored and indicators attempts replenished. After losing all the "lives" the game is over.
On the starting screen it is possible to choose the level and friction, influencing that how far spheres slide (the higher the friction level, the less inertia is chosen).
You can play alone, and together with the computer. The computer has infinite lives, but beats absolutely no tactics, always exposing cross sight on one straight line with the smallest ball (even if the path is blocked by collars, pockets and other spheres).