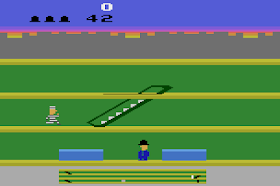 Genre: Action
Perspective: Side view
Visual: Fixed / Flip-screen
Gameplay: Arcade
Narrative: Crime
Published by: Activision
Developed by: Activision
Released: 1983
Platform: Atari 2600
An English police chasing a thief who is escaping from the mall. He must catch the offender before he manages to escape.

The mall where the game takes place has 4 floors. The police chase begins on the first floor, while the thief on the second floor. To catch the thugs, the police must climb stairs or use the elevator, avoid bouncing balls by building radios blaring, yellow airplanes and shopping carts. If the hero touches some of the obstacles, he will lose a little time. You lose a life if time runs out or if the police touches an airplane. Also, if the offender sees the police use the elevator, the lower floor, and the player will have to go back to the elevators to catch him, as the stairs only go up.
‹
›
Home
View web version