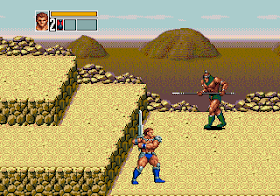 Genre: Action
Perspective: Side view
Visual: 2D scrolling
Gameplay: Beat 'em up / Brawler
Setting: Fantasy
Published by: SEGA Enterprises Ltd.
Developed by: SEGA Enterprises Ltd.
Released: 1993
Platform: SEGA Genesis / Mega Drive
Damud Hellbringer, Prince of Darkness, once again received the Golden Axe and cursed warriors. One of the soldiers manage to get rid of the evil spell, and he goes on a long journey to make friends, defeat the villain and return the Golden Axe.
Gameplay has been somewhat extended and improved, but overall the gameplay reminds the previous parts of the game and also adheres to the basic canons of the genre of hack and slash. In the game there are new characters, heroes of motion (special attacks, a joint attack enemies and joint magic) and the fork on which the player can choose his future path.
The characters of the game are: giant Proud Cragger, chelovekopodbnaya panther Chronos «Evil» Lait, swordsman Kain Grinder, who replaced Ax Battler, Amazon and Sarah Barn which resembles Tyris Flare. Gilius Thunderhead - the only character who appears from previous versions of the game, but he is not involved in the game process and appears only in the cutscenes for the game.

At that time, as in the previous parts of the game a set of special techniques-available players was rather meager, in Golden Axe III was significantly improved gameplay: new types of attacks, offensive and defensive techniques and locks. In addition, there are unique features that are unique to certain players: Proud can inflict a powerful blow in a jump, and Chronos and Sarah to make a double jump and jump back from the wall. In multiplayer mode, the game also have the opportunity of committing the combined joint attacks. Also, all the characters have super technique that allows throwing weapons along the entire length of the screen (except Chronos'a, who instead makes a powerful unlockable jump shot along the entire screen).
Some features that have been deleted in the second version of the game are returned back to the Golden Axe III:
The elves that steal magical potions and food players, returned back into the game instead of Mages-foes, found in the second part of the game.
Additional life can be obtained with the release of a certain number of prisoners encountered in the game levels. Captives can be enclosed in drums, crystals or protected by guards.
Use magic system has been returned to the original version, in which the player could choose how much to use magic; in the second part of the game was the ability to select the number of magic spells in the commission. On the other hand, it is possible to make the joint spells in the game two players. In any case, the magic in Golden Axe III efficiently than in the two previous versions of the game, despite the fact that all the characters are the same in terms of the maximum damage caused by the commission of the spell.
Players are free to choose their own path in the game, thanks to the elevated rates of forks. Some ways easier in terms of passing, but others allow you to see the full version of the ending of the game.

Cain is a well-balanced character. It features a good response and a fine sword. It has no obvious weaknesses. Speaks water magic.

armed with short sword. However, this shortcoming is easily compensated by its rapidity. It has a strong roundhouse kick, is able to perform a double jump (double jump), the ability to jump back on some of the walls, allowing in some cases to avoid falling or to gain an advantage in battle. Fluent in fire magic.

Proud is slow, but very powerful character. It is one of the most difficult in the management of characters because of their slow and unreliable super-strikes. He speaks magic land.

Chronos like a big human-panther. It is one of the most powerful characters due to his superb powerful that it is impossible to stop or block. He speaks of air magic.
‹
›
Home
View web version