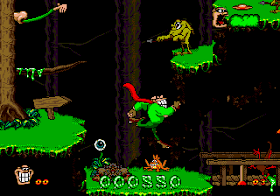 Genre: Action
Perspective: Side view
Visual: 2D scrolling
Gameplay: Platform
Narrative: Comedy
Published by: Interplay Productions
Developed by: Interplay Productions
Released: 1994
Platforms: SEGA Genesis / Mega Drive, Super Nintendo (SNES)
The game begins with a little intro. Professor Stinkbaum invented a device called the Zap-O-Matic, with which you can recycle any waste products and their "decay" is discharged through a "portal" to another dimension (Dimension X Crement). Millionaire Snotti Ragsdale, learning of this invention was employed in the laboratory of Professor. Then one day he saw an unknown villain abducts the main "unit", without which the mechanism can not work. To prevent global pollution, Ragsdale (superhero Bugermen), using the "portal", he went into another dimension. Here it needs to track down the villain and take away what he has stolen.

The main character in the game - a superhero Bugermen (born Boogerman.), Saving the planet from global pollution. Like any superhero, Bugermen has a unique and very original "superpowers". With their help, he has to go through several levels, to clean them from their enemies, fight bosses, and at the end to win the main villain.
Levels are designed as closed locations with lateral side-scrolling and 2D graphics. Each level is divided into a large three - four parts. They have a lot of different enemies, caches, bonuses and useful items. There are also obstacles such as chasms and traps. Sometimes it comes across "lift-teleport", resembling a huge nose (albeit somewhat different to the last level of "elevator"). Also present are "save points" - here they are in the form of rustic wooden toilet with BM inscription on the door. At the end of the levels are big bosses - very strong opponents.
Bosses (supervillains) have a considerable reserve of health and much more conventional opponents and the hero himself. It has its own certain "tactics" for each of the bosses. For example, during a battle with the first boss you need, jumping from one tree to another, dodge enemy attacks.
The enemies in the game - is the trolls and goblins, armed with spears, bats, ghosts, and other monsters of the cochlea; they are quite weak, but numerous. There are also more "strong" opponents. For example, one of them armed with a cudgel, which cause significant impacts, the other has a deadly cry, and the third is able to eat the useful items.
The game has a lot of useful items. For example, from the air valves, assembled at a level that you can build a "ladder" by which Bugermen gets to more life. Pepper gives the hero of "fire-breathing", some lumps of green mass increase "ammo", with the letter M bottle enhances the "armed", and the banks with the beans extend the range of "superpowers". Also useful items restocking of game points.
The game has an average level of complexity. It should be noted that the hero has a limited supply of health that can be completed in the course level (for this you need to collect red cloaks, like what is Bugermen). To destroy the protagonist, enemies enough to cause him about 2-3 strokes. At the same time, however, it is possible to replenish the supply of "life" after each level, and on the levels themselves are "save points" and a lot of prizes, which facilitates the passage.

Bugermen can get to the end on the ground level, and perhaps the branches of trees (except for the fourth sublevel). The trees are hidden many prizes, protected bats.

The boss of the first level. Attacks deadly chicken eggs, which keeps under his arm, and then moves on a game screen, trying to ram character. Also throws a chicken, like a boomerang.

The level is a set of platforms, separated by chasms. Bugermenu need to carefully move through these platforms and try not to break into the abyss.

The boss of the second level. Attacks storm clouds and flying heads. Move around the game screen with the jumps made by a long stick.

City in a parallel dimension. According to the structure resembles the first level, only much more difficult.

The third level boss. Supervillain in the flyweight suit. It has the ability to fly. Attacks larvae first, and then white spittle.

Bugermen climbs up on the ledges in the mountains. The main thing here - do not fall down.

Fourth level boss. Supervillain in ant costume. It has several types of attacks: burrows in the ground and triggers rockfall (from which you can hide, from the stones sometimes fall out prizes), getting then to the opposite side or from the source. After this, you can either use a sprayer that can not only take life Bugermena, but also its "ammunition", or throw up and down the blue discs.

The castle of the main villain. A huge building with a lot of moves and rooms filled with traps and enemies.

The final boss. Monster in a violet-yellow superkostyume, the owner of the castle. Boss, like Bugermenu, deadly attacks and breathing gases (much more powerful than the hero), moving on the playing field by jumping. Can summon enemies jumping out of the nose. After defeating him Bugermen takes away the stolen item and return it back to the lab of professor.
There is also a bonus level - Sewer City. This drainage, which can be accessed at any level through a kind of "Teleport". This teleport is located in a remote place or in the cache. Leave it can be through another teleport, located at the end of this level. Here the hero is necessary, moving on platforms and pipelines, collect useful items and try it does not fall into the sewers. If a player enters the teleport in and out of it, then passed the level you can go from the beginning, while collecting more points and bonuses. enemies can appear from some teleporters.