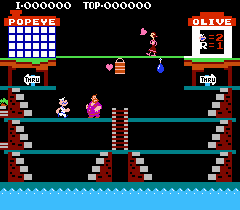 Genre: Action
Perspective: Side view
Visual: Fixed / Flip-screen
Gameplay: Arcade, Platform
Published by: Nintendo of America Inc.
Developed by: Nintendo Co.
Released: 1986
Platform: Nintendo (NES)
In the good old days of Popeye common among simple games "multiplegames cartridges". In addition to the nostalgic value, it attracts unpretentious gameplay and nice cartoon graphics. Managing sailor Popeye, we collect tokens of love - hearts that knocks us his beloved Olive. We prevent unshaven lout Bluto, and Olive claims to attention. Fists did not beat (he was worth a little Popeye), we have to dodge, relying on agility and diligence. You can blow on the arm Bluto to wear on his head a bucket, defusing the villain for a while. And if he does you took, you can eat a can of spinach. Then got on time will be strong, and no Bluto it is not a hindrance! Hearts must be taken quickly, not letting them lie around, or Game Over. The game consists of three levels and differences of endless repetitions, but this in no way detracts from its merits. In the mode for 2 players playing in turn.