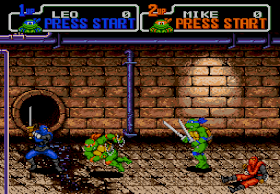 Genre: Action
Perspective: Side view
Visual: 2D scrolling
Gameplay: Beat 'em up / Brawler
Published by: Konami
Developed by: Konami Co.
Released: 1992
Platform: SEGA Genesis / Mega Drive
April O'Neil is a report from the Ellis Island as a sudden flash of light her audience together with the island of Manhattan repeatedly reduced in size. At this time, Shredder invades television broadcast and declares that it was only a show of force, and soon he plans to take over the world using Hyperstone - a treasure of measurements H. turtles have no choice: they must stop it.

The mechanics of the game as a whole follows the mechanics of the second arcade game in the universe of the turtles that came out on the platform SNES in the same year. The color scheme is also similar to «Turtles in Time», but the run is now responsible for a separate button, and the reception has been removed throwing the enemy toward the screen. The game consists of five levels («New York City», «A Mysterious Ghost Ship», «Shredder's Hideout», «The Gauntlet» and «The Final Shell Shock»), among which there are levels, specially devised for this game, as well as reinterpreted fragments levels from the first arcade game. Among the bosses found Leather forehead, Rocksteady (possessing techniques, like the first arcade game), Tatsu (Shredder associate chief and hero of the first two films, and the character of the game Teenage Mutant Ninja Turtles: The Manhattan Missions), Baxter Stockman (in the form of a man, like the first arcade game), and Krang Super Shredder.
‹
›
Home
View web version