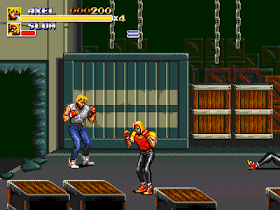 Genre: Action
Perspective: Side view
Visual: 2D scrolling
Gameplay: Beat 'em up / Brawler
Art: Anime / Manga
Published by: SEGA of America
Developed by: Sega AM7 R&D Division
Released: 1994
Platform: SEGA Genesis / Mega Drive
The game has a number of improvements over previous parts of Streets of Rage and Streets of Rage 2, such as a more complex plot, more endings, longer levels, a deeper scenario (with interactive levels and traps, such as holes) and faster gameplay . Now the weapon can only be used several times, after which it breaks. Added hidden characters in several in-game videos, in order to make the plot more deep and diverse.

The game has become faster and more dynamic than previous versions. The characters of the game have new movements and the ability to run (previously only Skate from Streets of Rage 2 could run). Player strikes cause less damage to enemies. The timer has been replaced by a “power indicator”, which, upon reaching the maximum level, allows special strikes to be inflicted without losing the standard of living.

After Mr. X suffered two defeats, he founded the research company RoboCy Corporation to cover his illegal activities. Dr. Zan, the world's best expert in the field of robotics, was attracted to create an army of humanoid robots capable of replacing important city officials. Having made a substitution, Mr. X planned to control the city with the help of a remote control. His criminal organization, the Syndicate, placed bombs with the radioactive element "shell" in different places in the city in order to divert police attention during the substitution of officials.
Dr. Zan (including the discoverer of the shell element) betrays the Syndicate, and reveals the true goals of the research and decides to stop the war at any cost. He contacts Blaze Fielding and tells her all the plans of the Syndicate. Blaise immediately gets in touch with his old friends, Axel Stone and Adam Hunter, and invites them to form a group in order to once and for all put an end to the existence of the Syndicate. Axel immediately accepts the offer, but Adam cannot do this (because of his service in the police) and sends his brother, Eddie "Skate" Hunter, in his place.

Three characters from the previous parts of the game are used in Streets of Rage 3: Axel Stone, Blaze Fielding, and Eddie "Skate" Hunter (Sammy Hunter in the Japanese version), each of which has its own strengths and weaknesses. Dr. Zan replaced Max from the second part of the game. Dr. Zan has some peculiarities compared to other characters: when he picks up a weapon, it turns into a glowing fireball. Adam from Streets of Rage participates in the game only sporadically, Max appears only in a good ending of the game.
It is possible to play as one of the three bosses when using cheat codes. Homosexual boss Ash was excluded from the western versions of the game (but is available via cheat cartridges in the Japanese version of the game). Shiva, a martial artist who appeared for the first time in Streets of Rage 2, and the new boss Ru (kangaroo) can also be accessed via cheat codes. Shiva and Roo can not use weapons.
Also in the Japanese beta (Bare Knuckle III) after defeating Mona and Lisa, thanks to cheat codes, a character named Monaliza could open up. She had the looks and sprites of her two sisters. But, after pruning the beta, Monaliza ceased to exist as a secret character. The game also has a Super Axel. You can play for it if you choose Axel in the choice of characters, press button A and immediately hold down X and turn the joystick D-pad clockwise. (It may not happen the first time).

The game has four endings, depending on the selected level of difficulty of the game and the number of levels passed by the player for a certain time.

In the Japanese beta version of the game (Bare Knuckle III) there were also two secret scenes that allowed the player to ride a motorcycle.
For the first time the urban scene with a motorcycle was cut, and the rest of the moto scenes were secret. However, noticing this, the developers cut them out completely. Bomber Games have added scenes with motorcycles to the remake of the game “Streets of Rage Remake”.

Differences in regional versions of the game

In the process of adapting the original Japanese game Bare Knuckle 3 to the European version of Streets of Rage 3, significant changes were made. The colors of the clothes of the three returned characters from the previous parts of the game (Axel, Blaise and Sammy) changed, the clothes of the female enemies became less outspoken, the homosexual boss Ashe was excluded from the English version of the game (but the possibility of choosing this character in the case of cheat codes remained) in the final splash, Blaise’s swimsuit was not so frank and the posture of a jump strike was changed (covering the underwear).
Another significant difference lies in the plot of the game: the plot of the Japanese version of the game begins with the explosion of a new explosive called Laxine, discovered by Dr. Gilbert, the explosion that claimed the lives of thousands of people. At the same time, General Ivan Petrov disappears. As it turned out, the disappearance of the general was organized by Mr. X, who plans to use the new explosive "Laxine" to start a global war.
In the English version of the game, all references to the substance “Laxine” were removed, General Ivan Petrov was replaced by the chief of police of the city, the storyline was changed - now the main idea of ​​Mr. X is to replace the main officials of the city with their exact copies - humanoid robots, in order to gain control above the city. In the case of a bad ending, Bare Knuckle 3 displays a photo of the ruined city as a background for the text that the player has lost; in Streets of Rage 3, the photo was deleted, the text scrolling is on a black background. In the case of a bad ending in the Streets of Rage 3 no captions are shown, while in Bare Knuckle 3 the captions are always shown.
The overall complexity of the game was also changed in the English version, even at the normal level of complexity, the game was much more complex than in the Japanese version. It should also be noted that the English version of the game can not be fully completed on the easy level of complexity (the game ends after passing through the 5th level).
Images of Axel and Skate are missing on the cover of the European version of the game, while a new hero appears next to Blaze - Doctor Zan. 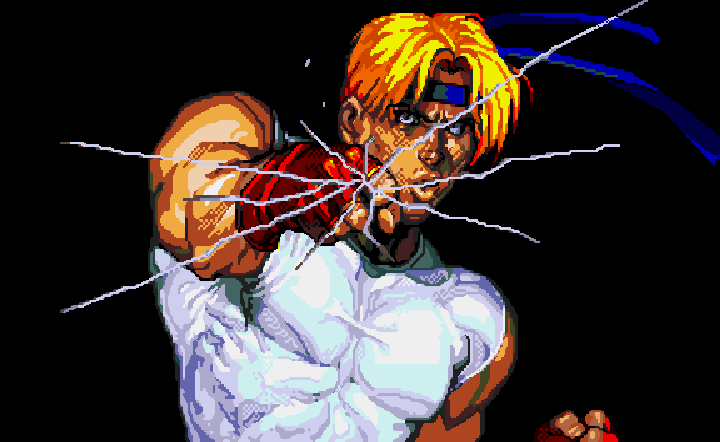