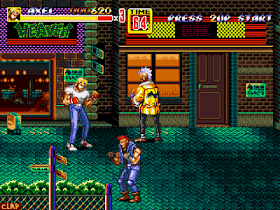 Genre: Action
Perspective: Side view
Visual: 2D scrolling
Gameplay: Beat 'em up
Art: Anime / Manga
Published by: SEGA of America
Developed by: Ancient Co., M.N.M Software, Shout!Designworks Co.
Released: 1993
Platforms: SEGA Genesis / Mega Drive, SEGA Master System
Streets of Rage 2 is the sequel to Streets of Rage, and its plot basically says that in the past the former policemen young Axel Stone, Adam Hunter and Blaze Fielding celebrated the victory against the criminal syndicate, one year after his fall. Axel Blaze turned bodyguard and now works as a dance teacher, but Adam decides to join the police again and goes to live in a small house with his younger brother.One day Axel receives a frantic phone call from Eddie 'Skate' Hunter (aka Eddie "Sammy" Hunter) saying that when arriving in the small house, it was all overturned and destroyed. Adam's disappearance marks the beginning of the nightmare, in a few days the union was back on the streets, now fully renovated and many new criminals fighters from armed ninjas even bikers hurling bombs.Axel contact Max, his old friend; Blaze and Sammy (Skateboard), and decide to unite again to destroy the criminal organization of the union, rescue Adam and restore order and peace.

Streets of Rage 2 has a greatly expanded gameplay from the previous, you can perform more than one type of flying and use a super hit, activated by pressing twice to either side and the punch button. With a special button you can make a special stop, and pressing forward more special, makes a second special. Each stage has a boss at the end, all now identified with the name.Even the colorful variations of enemies and bosses receive new names, as if they were actually different warriors and no variations.The stages themselves were also modified, this time having more than one part. An example of this is the very early stage, which starts down an alley in direction to a bar (facing the mini-boss Jack, a mocking punk that a sharp shooter knives at the end of this first part, which ends at the door of this bar ), soon after there is a change of scene and the player is now within such bar (ending up facing the sensual Electra, who is posing as a singer); to finish in the alley behind the bar (third part of this phase), the player faces the bartender (who is actually a criminal).

Go to the main menu. Hold down (A) + (B) on controller 2 while selecting Options. You can now select how many lives you start with (up to 9), choose your starting stage, and play at the Very Easy and Mania difficulty levels.
‹
›
Home
View web version