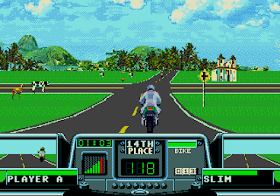 Genre: Action, Racing / Driving
Perspective: Behind view
Gameplay: Arcade
Vehicular: Motorcycle
Published by: Electronic Arts
Developed by: Monkey Do Productions
Released: 1995
Platform: SEGA Genesis / Mega Drive
Illegal races are held in the UK, Germany, Italy, Brazil, Kenya, Australia and Japan. The last two tracks not available on the first two levels of the game.The meaning of the game is that you need to reach the finish line in the top three, at high speed way through opponents, dodging cars and obstacles on the road, and not break the bike and do not get caught the police. In case of breaking motorcycle or caught by the police will have to pay for repairs or a fine, and if the money is not enough - will be offered a contract in which you want the next race to knock a certain racer motorcycle. The higher finishing position, the more play money to purchase upgrades, and the player gets.

On the first level is available a simple motorcycle and $ 1,000, which can be spent on upgrades (upgrade options include the improvement of the engine, tires, suspension, tires and protection) and can be put aside to buy a more powerful bike in the future. Motorcycles in the store are divided into three categories: "Rat bikes, Sport bikes and Super bikes. In each category, is available 6 motorcycles differing maximum speed, maneuverability and so on. Some of the stories have a super-nitro-boosters that are activated by double-clicking on a brief press on the gamepad gas.The difference of the game from its predecessor for improved detail and gaming environment that chopped out during a fight weapon remains with the player and in the subsequent tracks. As a player stick (club), mace, crowbar, chain, nunchaku, lube and a shocker. Weapons need to take away from the other riders. It can be switched by pressing the button on the controller «Start» by pressing the "up", and it works in pause mode. In addition, the available foot kick.Police patrols in addition to motorcycles and cars are at the disposal of the helicopter, if necessary, going down to the player on his head.