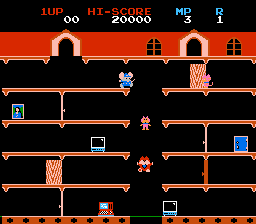 Genre: Action
Perspective: Side view
Visual: 2D scrolling
Gameplay: Arcade, Platform
Published by: Namco Limited
Developed by: Namco Limited
Released: 1984
Platform: Nintendo (NES)
An arcade game is about a mouse who needs to collect all the items at (TVs, radios, safes, etc.), and it does not get caught cats that roam around the level. But, fortunately, Mappy the police mouse, can activate traps that sweep down from the level of cats that, though not for long. After a few levels you become available bonus level in which you need a certain time to have time to collect as many balls as possible and pick up the latest and big blue ball, which allowed for more points. After passing the bonus level, everything is repeated again, but with a higher complexity of the game.