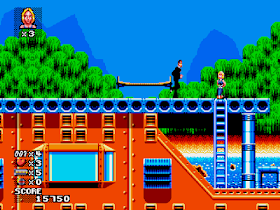 You can override. A - jump. A + Down - dismount from the platform down. In - shot by holding the button, you can shoot diagonally up or down. C - throw grenades. Up - climbing stairs or rope, hide in a doorway.
‹
›
Home
View web version