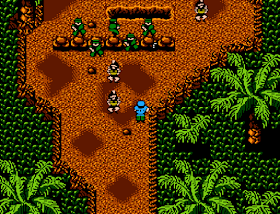 Genre: Action
Perspective: Bird's-eye view
Visual: 2D scrolling
Gameplay: Arcade
Narrative: War
Published by: SNK Corporation
Developed by: SNK Corporation
Released: 1988
Platform: Nintendo (NES)
Shooter, allowing to get used to the role of a revolutionary. Certain third world country ruled by a brutal dictator, your task - to overthrow it by force. After landing on the territory of the state, you need to cross the tropical forests, villages, mines, towns, military bases, until you come to the capital and not talk with the dictator a man. All levels overhead view. Like Contra, there are powerful additional weapons, disappearing with the death of the character. You can ride on a tank. It is necessary not to shoot anything that moves: levels across the hostages, bystanders and pets. Recent looks very funny; pleased that the creators of the game were not without a sense of humor. Clear and colorful graphics that still need to be a good game!

Level select: To select any level up to the ninth, simultaneously press the A and Start buttons while the word "One Player, Two Players." on screen.
‹
›
Home
View web version