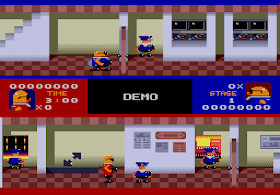 Genre: Action
Perspective: Side view
Visual: 2D scrolling
Gameplay: Arcade, Platform
Published by: SEGA of America
Developed by: SEGA Enterprises Ltd.
Released: 1991
Platforms: SEGA Genesis / Mega Drive, SEGA Master System (MS)
The game's plot is reduced approximately to the next. Two brothers-burglar - Mobo and Robo - decided to rob some of the richest companies, banks and museums of the city, closely guarded by the police. The goal - to collect all the valuables in the allotted time and not to be caught by police.
The game is a platformer with two- and 3D graphics (in different versions). Levels in the game - closed location; it is a building of several floors (two to five), each of which are valuable, guarded by police. With each new level the number of items and enemies increases. Collect all the items, characters need to climb to the roof and fly on an airship. The values ​​that have to steal, indicated on the map.
The character is armed with a gun, helping to fend off enemies. The police also have a weapon; some of them are equipped with shields and grenades. Also, police noticed a burglar can use the whistle and raise the alarm.